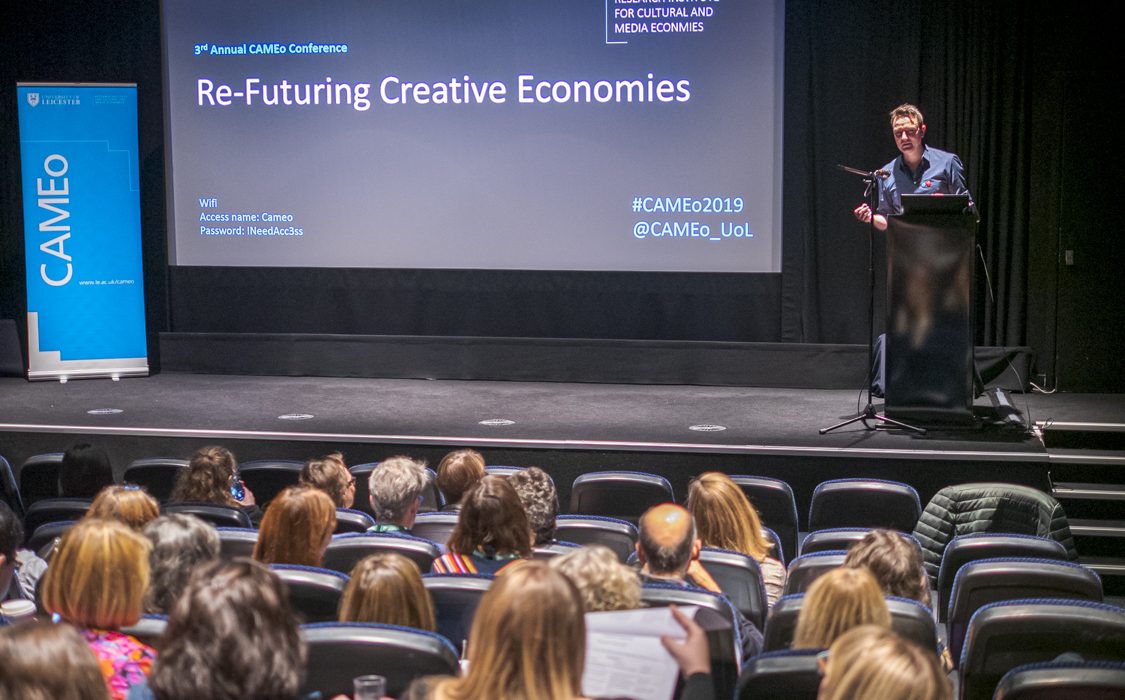 Last week’s CAMEo Conference was its third and the first I had attended. I’d heard good things about it and that proved to be the case: it was a supportive conference, with constructive questions for speakers, and the presentations were excellent.

The conference has always been multi-disciplinary with delegates from across the arts, humanities and social sciences, but all focused on what can broadly be defined as the cultural and creative economy. Including the cultural is important as it recognises the lineage of, and range of work in what many refer to simply as the creative industries. This critical stance was reflected in the conference theme, introduced in the first session by Mark Banks, Director of CAMEo (University of Leicester’s Research Institute for Cultural and Media Economies). Mark’s opening address called for a critical creative economy studies, an approach to understanding the cultural and creative economy which aligns with grand challenges facing society: diversity, equality and inclusion; environmental crises; and economistic colonisation of everyday life. We can see these themes coalesce, he said, in the corporate imaginary driving the fantasy of the creative economy illustrated in that stock photo imagery of google-plexes where young people perform creativity in open plan offices bedecked with colourful furniture, while enjoying coffee next to a pool table. But such imaginaries, reinforced by almost exclusively positive proclamations of the size and strength of the creative industries, hides the problems the sector faces. For a long time, research and activism has highlighted how the dynamics of the creative industries limit the chances of a successful career depending on an individual’s class, age, gender, gender identity, disability, sexual orientation and ethnicity.

In Mark Banks’s opening address, he also focused on the latest area of innovation and focus in the creative economy: immersive media and technology. He called for a better understanding of this area as it develops. At XR Stories we’re keen to embrace this challenge and recognise the tensions for the emergent immersive industries. The tensions are not straightforward to unpack but are borne of a constellation of factors including. First, the interdisciplinary competencies needed to created valuable immersive experiences. There is room for fruitful and fulfilling collaboration between academics and practitioners with different skillsets, approaches and ways of working, but there is also the potential for clashes. Second, the field is undefined and quickly evolving. Businesses, policymakers and academics have to work hard to catch up and understand the opportunities and constraints immersive media and technology presents. And in so doing, we need to be conscious of the limits and exclusions that new fields might create. Finally, much of the focus on immersive media and technology comes from its newness. This is unsurprising as much of the discourse around the creative industries privileges newness but sometimes this can be at the expense of understanding the benefits of existing practice. It is important growth of immersive experiences doesn’t obscure good work which isn’t quite as shiny and new. I was left wondering what progressive, inclusive and positive futures might emerge from immersive media and technologies – it is a question we’re exploring at XR Stories and an important one for the field.

The packed conference programme included fascinating, insightful and important papers which spoke to a range of critical issues, drawing on examples from across creative practice. Presenters illustrated the buoyancy of work about the cultural and creative economies, and demonstrated there is already a strong foundation for critical creative economy studies. Indeed, it is more likely the case there has simply been a missing label for the excellent work that has been undertake over the last three decades in this area (see also Kate Oakley and Jonathan Ward’s recent editorial for a special issue of Cultural Trends).

The highlight of the conference for was probably were the discussions in the paper sessions. The conference organisers asked all questions to be held to the end of each session and this facilitated rewarding discussion between presenters and the audience. This was certainly when I took most of my notes and where new ideas formed for me. Overall the conference was really informative and I would recommend it to anyone interested in the latest academic thinking on the cultural and creative economy.